Click To Get A Valuation Of Your Douglas Abdell Sculpture. We’ll give you a confidential fair market valuation of your sculpture and its marketability. We pay cash for sculptures by Douglas Abdell and take consignments to the gallery.

We have Douglas Abdell sculptures for sale. To protect the integrity and value of the artwork, we do not publish images on the internet. 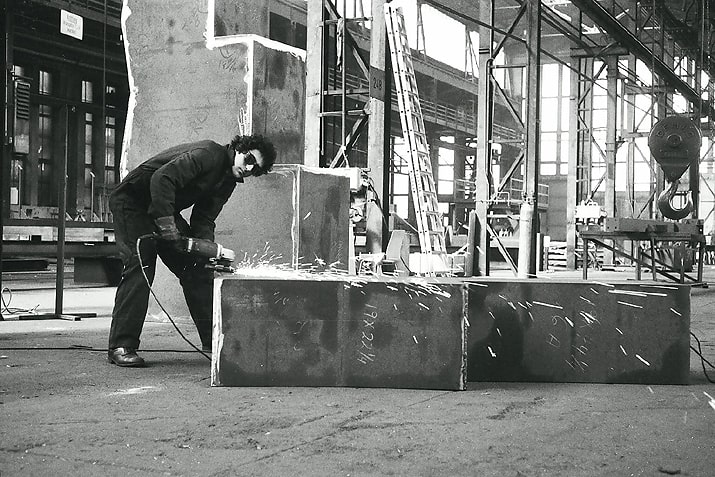 Born to a Lebanese father and an Italian mother in Boston, MA in 1947, Douglas Abdell has emerged as one of the most distinctive and recognizably unique sculptors in metal. They combine his mixed heritage along with a keen sense of the social and political issues of his times. Douglas Abdell sculptures are some of the most lasting and impressive sculptures of the late 20th century.

It has been said that Douglas Abdell sculptures invoke a similar feeling to those of ancient monuments like Stonehenge. Using massive and mysterious shapes to induce the viewer with a feeling of something indefinable. His works are both immediately socially impacting and thought provoking in an unusual manner.

Language and its construction have influenced many Douglas Abdell sculptures, which he likens to poems. From his earliest studies to his latest works, there is a linguistic theme that runs through everything. Calling on his Middle Eastern and Italian heritage, he started to explore Phoenician and Arabic use of symbols. Blending them and creating a new language that he used to describe and explain his works. As nobody else spoke the language, it did not clear up the intention of the work to anyone who was trying to figure it out logically. Only when the emotionality of the words were focused on did things become clearer. Even then, it confused a lot of people!

Like language, landscape is a continuing theme of Douglas Abdell sculptures. His immediate surroundings, and the landscapes of his past are mixed and refashioned in his artwork. Any sculpture has to be created with an awareness of the place it will stand. How people will see it and interact with it is almost as important as the sculpture. Douglas Abdell knows this, and cleverly weaves the themes of landscape and location into his metal work.

Beginning his sculpture study in the late 60’s at Syracuse University, Douglas Abdell never was going to do things conventionally. After getting his BFA, he retreated from the world and made his first major work, The Yads. Vaguely humanoid, but made entirely from metal, they are three legs attached to a box with an antenna sticking out the top. Douglas Abdell’s experiments with the color black led him to use the contrast of darkness against the polished metal surfaces of his metal sculpture. He said it gave them “weight”.

His 1973 work, the Kryads, was the first introduction of his invented language, “Phoenaes”. He would compose prose and poetry in Phoenaes, and in his book Kryad Poems, tells us why: “to remember what was happening when I made these particular sculptures and speaking about it in a language and rhythm that wants to approach their nature”.

Douglas Abdell sculpture and language are his way of communicating in a way he could not in English. It is a form of metalanguage, above other language, a more primal and directly communicative form of expression than the context-laden language we use every day.

In 1977, Douglas Abdell created the Aekyad series of sculptures, which drew heavily on geometric form. Alluding to figurative and geometric ideas, they initially had a great sense of movement. As time passed, the series became more static and minimalist. You could interpret this series as minimalist, but you would be missing the depth and complexity to the intention behind them.

Briefly in the 1980’s, he experimented with oil painting, acrylics, and collage in mixed media. He soon turned back to metal and stone.

Ear Less Full is a work from 1983 that has characters from English and Chinese incorporated into it, taking the implied sense of linguistic communication to a more immediate and obvious stage. He was working in New York at the time and the vast, human and inhuman landscape is a large part of the inspiration for this work. They summon the time and place beautifully.

By the 1990s, Douglas Abdell was living and working in Spain. This is a place where the Phoenicians had traded extensively. The earliest Celtic writing is found here in a Phoenician script. Abdell immersed himself in the study of this ancient Semitic script and later in Arabic. Taking elements of the languages, Douglas Abdell transformed them into sculpture, always taking inspiration from his environment as he created. He suggests an ancient feeling. The Phoenician seafaring culture is seen clearly in Magreb-Punic from 1995. It combines the “chaos and fragmentation” of modern times with the grace of the lines of an ancient boat.

Later, Douglas Abdell started to understand the Mediterranean through his work. M=AGUA and onwards are series that use an increasingly informal technique with concepts as diverse as Newtonian physics, karma, philosophy, and modern commentary on Mediterranean issues and conflicts.

From casting bronzes to welding, linguistic experimentation and invention to philosophical commentary on modern times, Douglas Abdell sculptures explore blended and enlightened ancient cultures. In the process, Douglas Abdell has cast a strong light on 20th and 21st century sculpture and linguistics.

He still lives in Spain, where his latest exhibition at the Museum of Cadiz in 2018 was well received. Douglas Abdell sculptures are highly collectible. He is considered a highly influential figure in modern sculpture. His name is not as well known as some, but it is unlikely to be lost in the depths of time.