Please contact us to inquire about the following Christopher Ries glass for sale. And we have more pieces not shown below. We also buy art glass and take consignments to the gallery.

Click Here To Sell Your Christopher Ries Glass. We’ll give you a fair market valuation of your glass and its marketability. 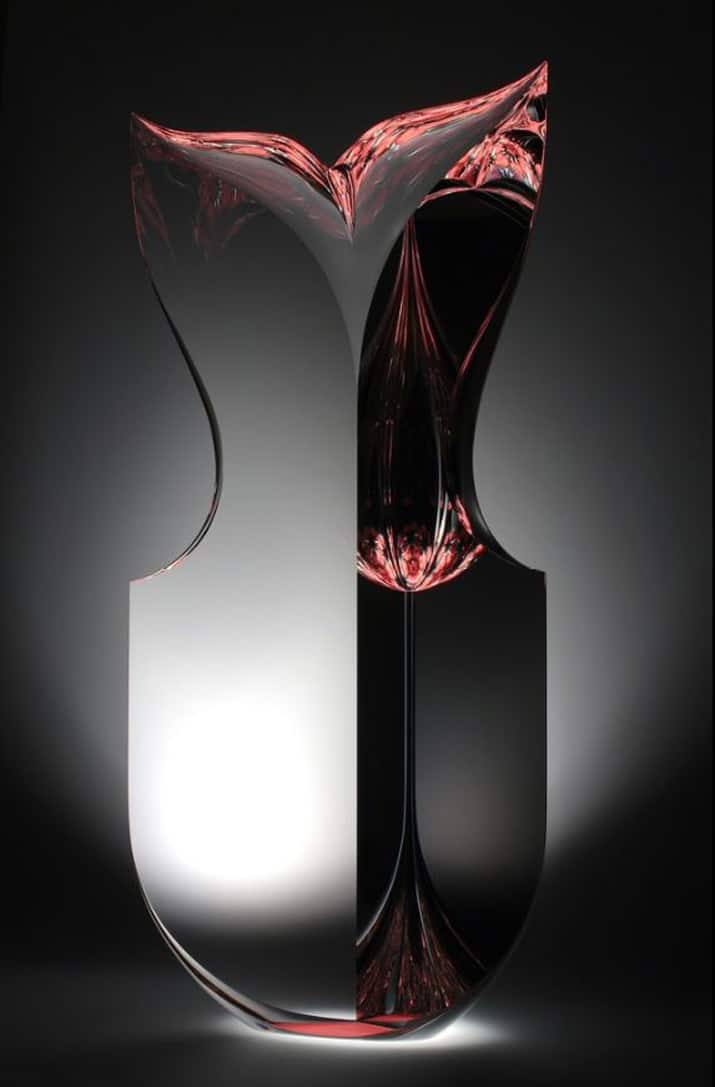 Glass artist Christopher Ries grew up on a farm in Central Ohio. Born in 1952, the son of Raymond and Mildred Ries, he became interested in art and ceramics as a young adult. While in high school, Chris Ries produced pottery in his parents’ cellar that he used as a makeshift studio.

In 1971, Ries began a Fine Arts degree in ceramics at Ohio State University. There he honed his skills in glazing pottery and the glass used to glaze ceramics. In his exploration of working with glass, he built a glass studio at the university. Thus becoming the first instructor as an undergraduate student. He studied types of glass, their chemical properties, compositions and blowing glass. He then graduated in 1975.

When he was in his senior year, Ries attended a visiting guest lecturer, Harvey Littleton. The lecturer was struck by the accomplishments of the young man as both a glass teacher and as a glass artist. Ries was invited to work at the University of Wisconsin-Madison as Littleton’s research assistant. With the offer accepted, Christopher Ries began working there from the next autumn.

Ries’s mentorship under Littleton lasted two years. In this time, his interest in the optical properties of glass grew and he started experimenting with cold glass carvings. Before this, he had focused on hot glass blowing. There weren’t specific glass-carving tools for sculpting cold glass at the time. So, Ries developed a lot of the necessary glass sculpting equipment himself. In 1978, Christopher Ries graduated from the University of Wisconsin-Madison with a Master’s in Fine Arts. He then returned to his home town in Columbus, OH.

After he graduated, Christopher Ries began researching the best glass for sculpture. His search led to him discovering Schott Optical (Schott North America) lead crystal. He would travel to buy cullet from Schott in Duryea, Pennsylvania. He continued to source glass from Schott over the course of the next two years. With his pieces of cullet, he would sculpt and carve in his Columbus studio. Here, he would also polish the pieces to completion.

After developing his technique, he impressed Dr. Franz Herkt, Schott’s President. They invited him to work as Artist in Residence for Schott Optical. He signed a contract in 1986 and worked with Schott to produce a body of work at the Duryea facility. Here he worked there as a non-salaried independent contractor. He left after his on-site studio was destroyed by fire in March 2015. This fire also ended Ries’s relationship with Schott.

A lot of the masterpieces he produced at Schott were made after he created forms in a private studio he established in Tunkhannock, Pennsylvania. And this studio is still in operation. Ries’s private studio is also where he worked with other mediums like paint and wood.

Christopher Ries glass sculptures have a technical proficiency. Meaning, they can change optical compositions internally. The artist uses a clear lead crystal for his works. This glass has a very high refractive index, excellent homogeneity and light transmission. The properties of this glass enable him to create these complex optical effects.

When Ries begins a project, he starts with a large block of optical glass. The glass is then reduced to its art form through a process of cutting, grinding, carving and polishing. Some of his largest sculptures weigh over 4,000 pounds. It can take as much as a year to reduce and polish a glass sculpture.

Art critic, professor James Yood at Northwestern University described Christopher Reis glass as “an art of such suggestiveness and finesse, of ceaseless transition and surprise that it constitutes one of the most intriguing exercises in the poetics of optics anywhere in contemporary art.” Ries has won many accolades and his work is exhibited in museums and major collections across the U.S., Japan and Europe.

Christopher Ries glass is the largest collection of crystal sculpture. Ries’s chef-d’oeuvre was the largest monolithic glass sculpture in the world. Weighing almost 680 kilograms (1,500 pounds), it was sculpted from a block of glass weighing 3,000 pounds. Ries’s Sunflower IV is one of his most famous sculptures. This weighs 1,100 pounds and it took around four months and over 1,800 hours to carve.

When describing his work, Ries has used the phrase “vessel for light” to describe his pieces. In speaking of his glass sculptures, he said; “all that we know about the universe, the composition of the stars, and the distances within the universe are studied through light…It is the one medium that gathers, focuses, amplifies, transmits, filters, diffuses and reflects it. It is the quintessential medium for light. I see it all on a symbolic level.”